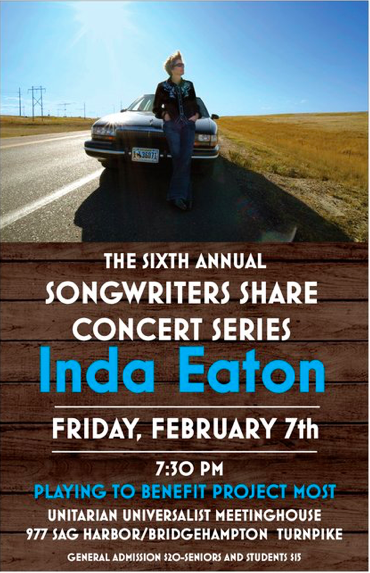 Longtime Songwriters Share Concert Series supporter and beloved East End musician Inda Eaton will headline her sixth annual show on Friday, February 7. Once again, Eaton has selected Project MOST, an organization near and dear to her heart, to share a portion of the evening’s proceeds with.

“Inda has been a part of the Songwriters Share series since it started six years ago!” Nancy Remkus, Songwriters Share Concert Series Founder, relayed. “She brings a joy of music and wonderful insights into life which charm audiences everywhere!”

The not-to-be-missed performance will take place at the Unitarian Universalist Meetinghouse in Bridgehampton at 7:30 p.m.

“This hidden gem of a series is the best kept secret that has done so much for so many,” Eaton said about Songwriters Share. “You instantly feel love and intention when you meet Nancy Remkus.”

The singer, songwriter, and storyteller is described as “a fusion of Melissa Etheridge meets John Mellencamp.” Her Americana roots rock sound delves into wanderlust, resiliency, and community.

“Her music reaches to your soul and her humor brightens any given day,” Remkus noted. “This is the series that gives back to the community and one of Inda’s favorite charities to play for is her next door neighbor – Project Most-which reaches the children of our community.”

The self-described “western expat” – who has roots in Wyoming and the southwest – now calls Springs home. She resides on a street where many of her neighbors have a direct connection to Project MOST. Eaton’s latest album, Shelter in Place, which is featured on Itunes and Spotify, was actually recorded at her East End abode. “I can’t say enough about the impact of Project MOST in our Springs neighborhood,” Eaton shared. “On my street, I live next door to student participants, educators and volunteers.”

Project MOST, which was founded in 2000 under the umbrella of East Hampton Day Care, offers essential after school care. Since its inception, the non-profit organization has impacted nearly 6,000 local elementary school students from the Springs Public School and John M. Marshall Elementary School in East Hampton, offering a variety of enriching programming and also academic assistance programs. More recently, it debuted additional programming at its new site, The Neighborhood House.

Eaton has also lent her expertise to the organization mentoring students about songwriting, as well as expressing their thoughts through music as part of Eaton’s music education program, ideas to inspire?.

“Beyond the love, care and creative programming – Project Most is showing the next generation how to be part of a community,” Eaton reflected.

“We love Inda, thank you!” Rebecca Morgan Taylor, Project MOST Executive Director, expressed. “It is so great that she believes in our organization and feels so passionate about supporting the youth in our community.”

“We are all excited about this night of wonderful music and experiencing the joy of coming together as a community to support local musicians and local children,” Remkus said.

General admission is $20 and $15 for seniors and students. A complimentary wine and cheese reception follows the concert, when attendees can have Eaton sign one of her CDs.

“We hope to see you there!” Remkus added.

Following Songwriters Share, you can hear Eaton on Brunch with Bonnie on WLNG on Sunday, February 23 from 12 to 2 p.m. or during Shelter in Place at Bay Street Theater on Saturday, March 7 from 8 to 10 p.m.

Nicole is the Editor-in-Chief of Hamptons.com where she focuses on lifestyle, nightlife, and mixology. She grew up in the Hamptons and currently resides in Water Mill.